The wonder of Puerto Peñasco’s tides

Puerto Peñasco’s thrilling tidal movement is a spectacular show of nature, and a wonder to anyone lucky enough to witness it.  This phenomenal change in high and low tides can be easily admired by all as the sea recedes meters at a time, or as the water returns to cover parts of the beach.

Oceanographer Roberto Escalante Ramirez explains the extraordinary change in tides in this area is due to various factors, but mainly because the ocean floor along this coastal region is stretched out. In other words, the shallow depth makes the rise and fall of tides extremely notable.

Furthermore, Puerto Peñasco is located in the Upper Gulf of California, which is itself a basin that produces a type of natural encasement of water currents, making the tidal shifts more visible.

The tidal shifts in Puerto Peñasco, while unique, can also be found at the Bay of Funday, Canada; in Santa Clara, Chile; Servern Beach Bristol, England; and La Rance, France, which all have similar conditions.

It really is amazing to see how at any given moment the sea appears to be moving away and at others you can watch as it covers the entire beach!  The best time to see the change in Puerto Peñasco’s tides is around the full or new moon, with Fall moons tending to lend to the highest and lowest tides. 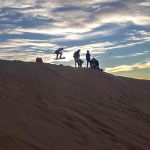