Puerto Peñasco takes part in Fiesta in the Desert!

Puerto Peñasco’s Convention and Visitors Bureau (OCV) had the great pleasure of recently taking part in Fiesta in the Desert XI of the American Society of Travel Agents (ASTA). This year’s Fiesta in the Desert, held July 11th – 12th in Scottsdale, brought together a record number of travel agents and tour operators from across the globe, more than 200 of whom attended the OCV’s presentation highlighting all that Puerto Peñasco has to offer.

Thanks to support from both the Mexican Tourism Board (CPTM) and the Sonoran Tourism Commission (COFETUR), the presentation received welcome comments and tremendous interest in Puerto Peñasco, Sonora, and Mexico as a whole.

With the support of CPTM, the Puerto Peñasco OCV presentation detailed important points including the proximity of our beaches to U.S. states of Arizona, New Mexico, Colorado, and California, the growing number of yearly visitors to the area, beach activities, ecotourism, golf, the Pinacate and Grand Desert of Altar Biosphere Reserve – named a UNESCO Natural World Heritage Site, as well as traditional massive events in town such as the Rocky Point Rally™, triathlon, and concerts including Roger Clyne’s Circus Mexicus, etc.

Comments heard throughout the presentation included exclamations of surprise, such as: Wow! Rocky Point offers all that? Rocky Point is that close? Is there an airport? How can I get there? We can fish like that in Rocky Point? I want to go to Rocky Point!

ASTA President Staci Blunt thanked the Mexican Tourism Board for their presentations, as well as for the great mood created throughout the event.

This year’s Fiesta in the Desert left behind the tremendous satisfaction of being able to interact with a grand number of people, all interested in Puerto Peñasco! 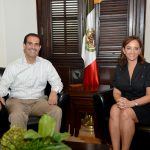 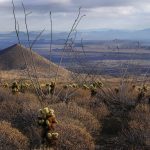