With the number of visitors topping 35,000, U.S. Memorial Day Weekend has firmly established itself as one of the best tourism weekends in Puerto Peñasco.

Groups of friends and entire families took to the beaches and streets of Puerto Peñasco this past weekend, resulting in an overall occupancy rate of 87% at area hotels (from Friday through Sunday). This represents an economic boost to the area of nearly 20 million pesos ($1.75 million US) according to statistics reported by local accommodation providers to the Puerto Peñasco Convention and Visitors Bureau (OCV).

Héctor Vázquez del Mercado, OCV President, stressed though there were thousands of vehicles and ATVs roaming the city streets, there were no fatal accidents during the holiday weekend within the city or along surrounding highways.

He indicated this past Memorial Day weekend represents a 15% increase in the number of visitors over the same time last year, which is a good sign for the hotel and tourism market as the Summer begins.

“We are now entering into the Summer vacation months, with weekends pointing to higher occupancies and of course more so when there are events, such as the upcoming concerts of Roger Clyne, and July 4th weekend,” detailed Vázquez del Mercado. 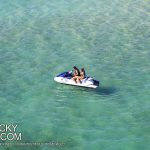