A Taste of Paradise

If something turns Puerto Peñasco in such a special destination it would be its exceptional natural wealth. Adventurers will find here a true paradise; desert, islands, semi-virgin beaches, caves and endless wonders to be discovered. Without doubt, the best option to know the natural treasures of the zone is to attend to the Centro Intercultural de Estudios de Desiertos y Océanos [Intercultural Center of Desert and Ocean Studies (CEDO)], a non-lucrative organization which favors the ecological education and protection of land and sea environments of the region. Its facilities (located at 9 km from the beach Las Conchas) house an interesting museum, an extensive bookstore and some exhibits. But, what a better way to get sensitive before the urgency to preserve the natural environments than living them on the flesh? That’s why; CEDO offers the visitors guided tours to the Sonora natural destinations.

These visits allow knowing the vast dunes, volcanoes, and sarahuales of the Reserve of the Biosphere of El Pinacate, lodged in the core of the Great Desert of Altar. They also get close to the “tide pools” in the costs of the Sea of Cortes, zones where the tide goes up and down several meters, twice a day. On going down a wide coastal line is discovered and ot can be seen among the holes of rocks hundreds of marine animals such as snails, sea cucumbers, pistol shrimps –which produce strong sounds similar to gunshots–, anemone, sea stars and even octopus.
Another travel goes deeper in the estuaries of the desert coast, such as the estuary Morúa, home of countless species of resident and migratory birds. At San Jorge, a rocky island located at some 40 kilometers to the southeast from Puerto Peñasco, reside pelicans, bobo birds, seagulls and bats. However, the main inhabitants of this reserve are seals; CEDO vessels get close to certain areas of the coast where tourists can swim, snorkel or sail in kayak surrounded by the friendly mammals that get close to play with them. 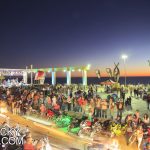 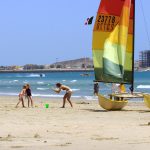