A dozen curious facts about the Pinacate

1. During his expeditions through the Pinacate in the early 1700s, from atop the Santa Clara peak Jesuit Priest Francisco Eusebio Kino (“Padre Kino”) determined that Baja California was a peninsula rather than an island, as was believed at that time.

2. Given the similarity between the Pinacate and the moon’s surface, in 1969 NASA astronauts carried out tests in this area prior to the first trip to the moon.

3. Although the area surrounding the Pinacate and the Desert of Altar seems inhospitable, there are more than 500 plant species, 40 mammal species, 200 bird species and 40 reptile species to be found here.

4. For the Tohono O’odham culture, the Pinacate is sacred ground. According to their beliefs, this is where the universe was created as well as the roots of the four elements: water, land, air, and fire.

5. The largest sand dunes in North America can be found in the Pinacate. The dunes are in the form of a star and the “Queen Dune” reaches up to nearly 985 feet.

6. The bio-diverse area of the Pinacate is home to animals at risk of extinction including the Sonoran pronghorn, Gila monster, bighorn sheep, the desert tortoise, and chameleons.

7. For cyclists, there is a 15 kilometer bike route through the Pinacate. This begins at the biology station and winds along the “Batamote” range, offering a ride through diverse landscapes while being in contact with nature.

8. Given its natural beauty and tremendous biodiversity, on June 21, 2013 the Pinacate Biosphere Reserve and Grand Desert of Altar was named a World Heritage Site by UNESCO (United Nations Educational, Scientific, and Cultural Organization) during its gathering in the Kingdom of Cambodia.

9. The “Schuk Toak” Visitors Center contains an interactive museography about the Sonoran desert and the Pinacate. To date it is the largest self-sustaining public building in Latin America that runs on solar power. The Visitors Center is located at kilometer 72 along the Puerto Peñasco – Sonoyta highway.

10. The sight is known as the Pinacate based on the brilliant black color that distinguishes beetles of the same name, as well as the manner in which these insects raise their hindquarters thereby lending the name to the tallest volcano in the region (Volcán Pinacate), with an altitude of 3937 feet.

11. The Grand Desert of Altar is the most biologically diverse desert in the world.

12. The volcanic zone and dark lava flows found in the Pinacate are the result of volcanic eruptions dating back 4 million years! 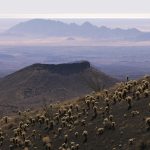 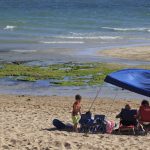 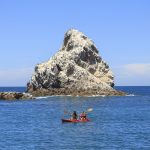